It took us an hour and a half of a pleasant, greenery-filled drive from Kumarakom to reach Kochi. Everyone left the backwaters behind somewhat grudgingly and the general consensus was that we were in for a waste of a day as there would be nothing much to see or do in Kochi. Infected by the general mood, I too approached Cochin or Kochi as it is now called, somewhat low of spirit.

How wrong we all were! As we were approaching the port town, we were joined by Usha who was to be our local guide. She said we would be visiting the old Kochi area that was popularly known as Fort Kochi. The coach wound its way out of bustling traffic and busy roads to ones sheltered by old trees with ample pavements, dotted with white washed colonial bungalows. The vibe had changed completely. We all got off the coach and Usha, in her somewhat staccato Malayalam flavored English, and listed out the places we were to cover over the next few hours.

First off the list was a Jewish synagogue which was locally referred to as the Pardesi synagogue. Located in an area that is called the Jew Town, the Pardesi synagogue is the only one still in use of the seven in the neighborhood. And how many Jews does it serve. A staggering number: Five! That’s right! At last count there were only five Jews left in the once thriving community that came and settled there, all the way from Spain and were great traders of spices. We were asked to pay a handsome entrance fee of Rs.5/- each, take off our shoes and enter the synagogue. Photography was strictly prohibited. The Pardesi synagogue we were told was led by elders and was bereft of a rabbi since there was no elder male Jew. Ornate Belgian glass chandeliers hung next to several colorful Moroccan lamps, both in contrast to a lapis blue hand-painted flooring of Chinese porcelain tiles and white walls. The Torah lay concealed and the tourists remained out of bounds beyond the ground floor, as the first floor chamber was reserved for Jewish women only. 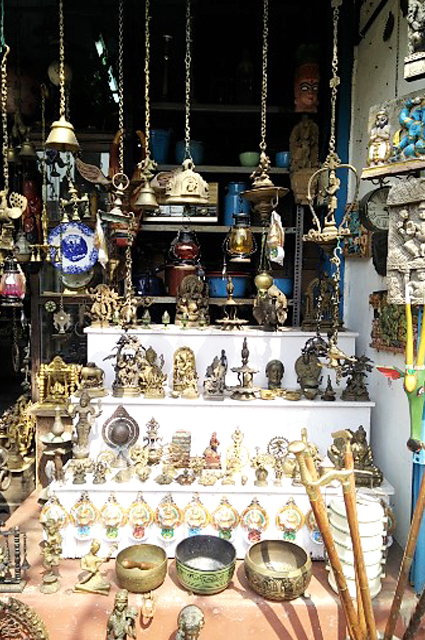 From the Jewish synagogue, we headed to yet another place of worship, this time the oldest European Church in India: the St. Francis Church that has been a mute witness to the many colonial invasions in the sub-continent. Interestingly, it started out as a Portuguese Church in 1503, was later taken over by the Dutch and yet again by the British. St. Francis Church today stands as an Anglican Church. As she showed us around, Usha paused to reveal the various nicknames of Cochin, given to it by its respective colonizers: Little Lisbon by the Portuguese, Homely Holland by the Dutch and Little England by the British! We also stopped to take pictures of Vasco da Gama’s tomb. Vasco died in Kochi and was buried in this very church. It was only fourteen years later, that his remains were sent to Lisbon.

The humidity was beginning to get to all of us and we quenched our parched throats with fresh coconut water, sold for Rs.40/- a piece. Sipping on the coconut water, we witnessed how large ‘Chinese’ fishing nets were cast for a catch. These cantilever nets needed several men to handle its ropes and were useful in catching faraway seaside fish. For a small fee, one is free to try her hand at the ropes and even have the catch of the day cooked for lunch at any of the several roadside shops.

Post the re-charge, we were better equipped to amble around the very characteristic streets that were lined with shops on both sides. Cafes abounded as did shops selling Cashmere pashminas, silver jewelry, spices, and artefacts, antiquities such as pocket watches, gramophones and rotary phones. Every other store seemed to stock incense, perfumes and attar that sat next to mounds of colorful powder. There were some art galleries as well where exhibitions were on and made for interesting browsing. The entire street from end to end had a silver shimmery ribbon tied to it that rustled with the breeze, creating a unique soundscape. One couldn’t help but wish for the zone to have been traffic-free for easier ambling around and for the weather Gods to be a tad kinder because as the sun came down harder, we had to take a break from our street sojourn and step into what looked like an old home, turned into a cafe for lunch.

If you are planning a trip to Kerala save at least a day to savor Fort Kochi. It’s a charming trip back in time as long as you are armed with enough sunscreen and a plentiful, straw hat!

It took us an hour and a half of a pleasant, greenery-filled drive from Kumarakom to reach Kochi. Everyone left the backwaters behind somewhat grudgingly and the general consensus was that we were in for a waste of a day as there would be nothing much to see or do in Kochi. Infected by the general mood, I too approac

Jamshedpur: Of Bulbuls on Falsa trees and Rose Gar..

Beautiful Tawang – A Jewel in the East