Day one of game drives across the Bandhavgarh National Park left us chasing the majestic yellow stripes in vain. Not that I hadn’t enjoyed the drives. The crisp air and the lush green forests after the rains coupled with valuable sighting barring that of the tiger had made for an enriching day. As we wound our way back to The Tree House Hideaway, a delightful resort run by Pugdundee Safaris, we made one final stop. Right on the main road of the Tala zone, before we turned into a narrower lane that ended at the resort, I spotted a sign that read, Malaya. Something about it made me go in.

Stepping into Malaya, I was greeted by a profusion of collectibles. Wall hangings, lamps, coasters, toys, pictures, scarves, jewelry, artefacts and unending bric-a-brac: the little shop was abounding with colorful, handcrafted pieces made out of material that ranged from wood to ceramic, from paper to coconut, cane, pine needle, papier-mâché and much more. After browsing for just a bit, I realized that every single item was ethnic in its appeal and came from various corners of our country. As I tinkered around with some wooden chimes, a sprightly woman sporting a silver mane came up and introduced herself to me. She said her name was Neelam and that she owned the store. Since I was the only customer at that point, we got chatting and Neelam shared her fascinating story.

Hailing from Ahmedabad, this Gujarati woman worked for a travel agency but chose to live about 50 km away from the city near a forest reserve where she’d built a farmhouse for herself and her daughter. Though the faraway living meant she would be driving 100km up and down daily, she preferred it living in the concrete jungle. “In fact it took one of my friends to make me realize that I enjoyed driving around the countryside so much,” she says. After clocking seven years on the trot in the agency, Neelam was fairly tired of her city life and job. “One fine day, it dawned on me that I was earning Rs. 30,000 a month or Rs. 1,000 daily; an amount which I could have perhaps earned by selling sandwiches or something!” In 2005, she called up her boss and put in her papers, sans a plan. 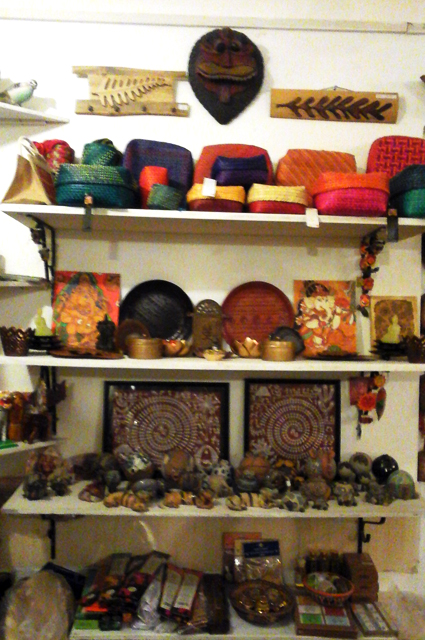 As fate would have it, in 2006, she accompanied a group of guests to Bandhavgarh in Madhya Pradesh and instantly knew that she had found her calling. “I was looking for someplace quiet; for a real jungle and not the concrete one that the city life offered.” Neelam decided to sell off her precious farmhouse and move to the forest town of Bandhavgarh. “I put the money in fixed deposits so I was assured of some interest every year. Besides, I knew that the cost of living in Bandhavgarh would be much less.”

Renting a small space she started Malaya in a modest way in 2008 with some handicraft items sourced from Kutch and Gujarat. Why the name Malaya, I enquire. “Well, I wanted a word in Sanskrit that indicated forest and found long a word that ended with Malaya. So I edited it and used just the latter half. I was wrong of course, because a few years later a scholar came to my shop and explained that Malaya meant mountain and not forest. But by then, Malaya was born and I decided to stick with it.”

Soon enough, Malaya began to become a game changer. Fueled by her passion to drive, Neelam started taking road trips within India. In 2009, she traveled all the way from

Bandhavgarh to Andhra Pradesh via Nagpur, drove onto Kodai, Chikmagaulur, Mysore and Bangalore. She spent 35 days on the road, exploring towns and villages before coming back to base camp. All along, she would keep an eye out for ethnic handmade stuff, picking up tribal art and craft to be showcased and sold at Malaya. Her guiding light was a book titled, ‘Handmade in India’ by Aditi Ranjan. “Back then I was driving a Tata Marina and now I drive a Tata Sumo. In 2016, I did 14,600km in 81 days, driving all over Allahabad, Varanasi, Kanpur and Delhi before entering Rajasthan and exploring it in toto.” Each of her travels leaves her richer with myriad experiences and memories. After each substantial purchase, she sends off a consignment to Umaria, the closest railway station to Bandhavgarh and carries on.

“Malaya started with a turnover of 1.4 lakh in 2008 and in 2016 I closed at about 12 lakhs,” Neelam elaborates. Recalling one of her fondest purchases, which she eventually kept for herself, she narrates how she bought a real kamandal from Pushkar in Rajasthan for Rs. 8,000. Her shop also has a series of fascinating musical instruments that emit all kinds of sounds. Amongst them are a set of storm drums that give out the sound of an oncoming storm, bird whistles, baul instruments, wind flutes and so on.

In the last eight years, Malaya has given Neelam Verma an opportunity to travel and explore her country intimately, meet loads of new people from all over the world, interact with artisans and make Bandhavgarh her home. Most importantly, it has allowed her to live life exactly how she wanted to: on her own terms.

As far as my day went, Bandhavgarh eventually lived up to its promise: I did get up-close with a real tigress!

Day one of game drives across the Bandhavgarh National Park left us chasing the majestic yellow stripes in vain. Not that I hadn’t enjoyed the drives. The crisp air and the lush green forests after the rains coupled with valuable sighting barring that of the tiger had made for an enriching day. As we wound our way

Jamshedpur: Of Bulbuls on Falsa trees and Rose Gar..

Beautiful Tawang – A Jewel in the East